This year, our school community will gather at the Cress Creek Country Club to celebrate the 166th anniversary of the founding of our school by Fr. Charles Zuker.  We will also recognize the achievements and accomplishments of the current school year by acknowledging the many individuals who have played a vital role in making our school the success it is today. 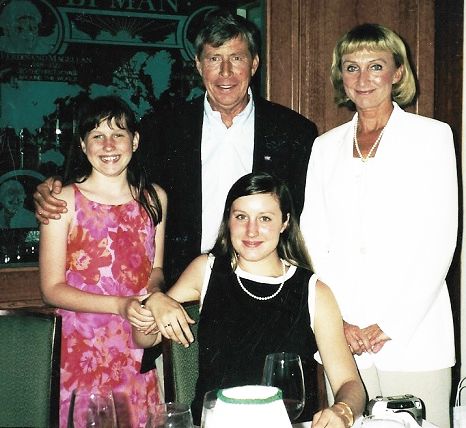 Jim was a successful home developer in our town who believed strongly in the importance of Catholic education. He was a visionary who realized that the traditional model of funding our school could not be sustained with Bingo, Book Fairs, and candy sales supplementing parish subsidy and tuition.
“Jim had great business instincts,” noted his former wife, Amy.  “He reminds me of the panel on Shark Tank who make decisions on ideas worthy of investment,” she went on to say. “No doubt he felt Peter and Paul was important enough for such an undertaking.”
In 1989, the Peter and Paul School Board decided that a successful advancement program could not succeed solely with using volunteers.  The vision of those school leaders was to build an endowment which would eventually help sustain the long term financial viability of the school.  Even an astute businessman as Jim could not have forecast that our school’s most recent Annual Report would reflect a combined corpus in our Capital Improvement, Teachers’, and Tuition Assistance Endowments of more than $15 million.
Even more impactful, earnings of $545,085 from those endowments have been applied to our school budget this year alone.
When Frank Glowaty was hired as Advancement Director 30 years ago, he and former pastor Fr. Jim Lennon began to seek out parents and alums who could provide leadership, vision, and stability as our Advancement Board and program were both in the early stages of inception.  Jim was at the top of both men’s lists.
“Jim was our rock,” recalls Fr. Lennon.  “Whenever frustrations grew or enthusiasm for the effort waned, Jim would calm the waters with his steely resolve.”
“This recognition is long overdue,” remarked Glowaty.  “We started from scratch.  There was no blueprint from any other school and no help from the diocese.  We were in unchartered waters and Jim always kept the Board focused on their mission.”
Jim served as Advancement Board president from 1989 – 1996.  The initial goal of the group was to build a $1 million endowment by the turn of the century.  Many members silently chuckled at such a lofty, and many thought, unrealistic goal.
At the very next meeting though, Jim called for a course correction.  “I’ll never forget his comments if I live to be a hundred,” quipped Glowaty.  Jim said ‘If our goal today (1990) is to have a million dollars in the bank by 2000, inflation will eat that buying power away over the next decade.  What you can do with earnings from a million dollars in 1990, you’re going to need an endowment of $1.5 in 2000 to have comparable impact on the school.’
He was dead serious.  To his credit, the Advancement Board reached their target two years ahead of schedule.
Assorted health issues, including effects of Agent Orange, claimed Jim’s life in 2015 at age 69.
At this year’s dinner dance on Friday, May 3, at the Cress Creek Country Club, Jim Oehlberg will become our first Hall of Honors recipient to be inducted posthumously.

There are also six members of our faculty and staff  who are celebrating milestone anniversaries will also be recognized for their combined 90 years of dedicated service.

Parents whose term on one of our four Leadership Boards expires this June will also be thanked for their contributions.

Here is the timeline for the evening: